Segovia, A Taste of Spain in the Prairies

YYZ ➔ YWG. I haven’t officially arrived in Winnipeg until three things have happened. One: Chris takes a photo of me as I descend down the airport escalator in Arrivals, clad with polka dotted carryon and way too many layers, an indicator that I am in fact a foreigner. Two: A stop at Stella’s, any Stella’s location will do, for a Chorizo Hash and a cup of coffee. Three: A dinner date to Segovia, Winnipeg’s best restaurant as I have dubbed it.

Segovia is a tapas restaurant in Osbourne that has been creating masterful dishes since 2009. Husband and wife duo, Adam and Carolina Donnelly, display a passion for their craft that is sort of immeasurable. If I had to put it into words, dining here feels like dining across the Atlantic in a trendy nook of Barcelona, surrounded by friends all with a glass of Tempranillo in one hand a croqueta in the other; life is good.

It’s that vibe of transportations—of feeling like you’ve been teleported to a completely different continent, time zone and era that makes Segovia stand out among the tall wheat fields and simple Prairie fare.

Don’t get me wrong, there are many an institution of Peg restaurants, but when you’re looking for something a little bolder, Segovia delivers.

Like my other visits to Segovia, I was accompanied by my Manitoba man, Chris. Also like all our other visits, we decided to dine on a weekend evening, which is usually not the smartest idea.

Because tapas bars are few and far between and because the food, ambiance and cocktails are incredible, Segovia is a tricky locale to grab a seat at right away. Plus, their no reservation policy also makes it tricky to walk in and be table ready.

On this occasion, Chris and I arrived at 7 p.m. (we know, prime dinner hours...whoops) and were met with some sour but expected news: 17 parties ahead of us on the waiting list, a minimum 90 minute wait. Oy!

Flash forward to an aperitivo at Cornerstone Bar & Restaurant, our usual waiting spot.

After two hours of chit chatting while nursing a French Rosé and methodically munching on an order of spring rolls, our table at Segovia was ready.

I should note that Segovia has now partnered with the Yelp app so you can check waitlist times and receive notifications of the status of your table, unlike the previous way of sending text messages to waiting patrons. Thank God, I downloaded that app or we never would have known that our table was ready!

After being seated, I ordered a glass of of Tempranillo and Chris did a run-down of the menu once more. We had a fair amount of time to plan our menu while at Cornerstone so it didn’t take us long to figure out what we’d be ordering.

The fall tapas menu is incredibly synonymous with autumn between the warm dishes, fragrant spices and belly-filling ingredients. Interestingly, the menu also was under more of a Middle-Eastern influence with ingredients like dukkah, zhoug, and tabbouleh cropping up on their playbill.

The finely sliced shards of Iberico Ham were delicious as usual, finished with a drizzle of Spanish olive oil, just spicy enough to catch you by surprise for the untrained palate.

On our Cheese Plate, we sampled an unpasteurized Spanish cheese, Comte, which was a mild, firmer cheese that familiarly reminded me of an unripe Caciocavallo. Beside it, a pasteurized white aged cheddar from England that was so smooth and creamy that it was spreadable. This paired unbelievably with a swipe of apple butter. The third cheese on our plate was another pasteurized English cheese, orange in colour and reminiscent of a much milder bleu cheese, then this was one of my favourite bites of the night when paired with the fruit seed crackers.

My only complaint is that I wish there had been been just a smidge more apple butter to play around with. In general, I’ve noticed that regardless of where we dine, when it comes to sauces or spreads accompanying cheese or charcuterie, there simply is never enough. I know these accompaniments are not the star of the tasting plates, but I personally like to try different flavour combos in a medley of ways that just never seem to account for enough jam or honey or—in this case—apple butter. 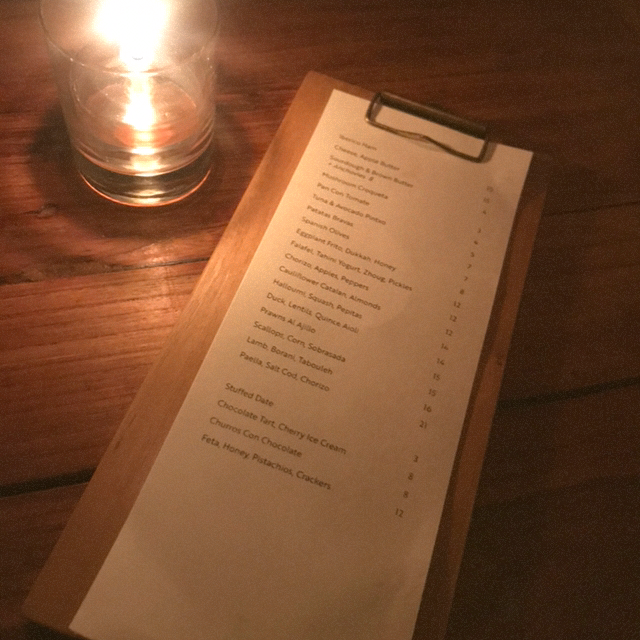 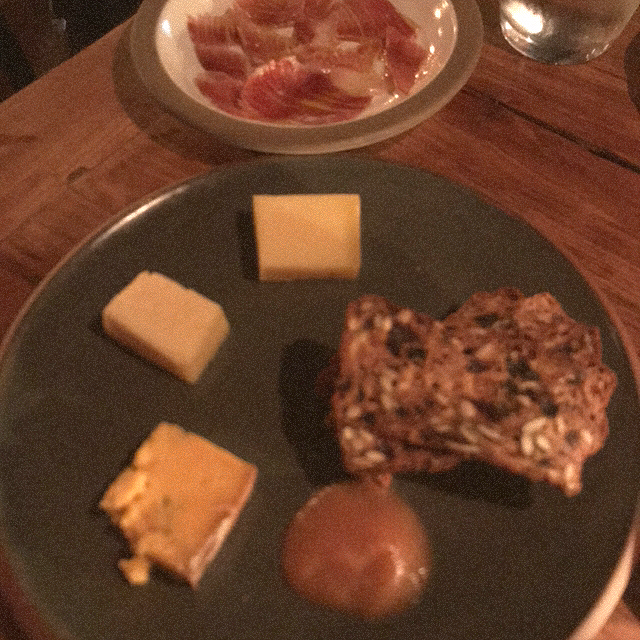 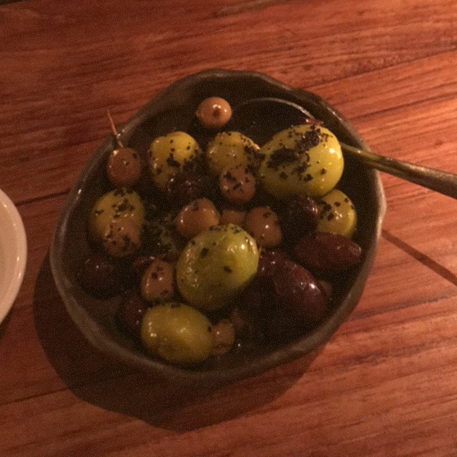 Moving on, the Spanish Olives were warm, spiced and smoked. The traditional citrus burst of orange peel that characterizes the olives at Segovia was elevated by an infusion of what tasted like bonfire smoke. Placing a single olive on our tongues, both Chris and I were surprised by the daring smolder of the smoke. Our excitement, however, was a little short-lived. Smoky richness soon felt like a hazy soot after one two many olives. I have to say, I prefer these green and brown pearls without the smoke.

What really stole my heart was by far the Mushroom Croqueta. The crackle, crunch, crinkle of this crispy croqueta was without flaw. Never have I had a croqueta with a coating as satisfyingly crisp as this mushroom variation.

Tapping my fork against it, the croqueta wouldn’t budge. Only when I bite into it did the croqueta reveal an inside erupting with earthy mushrooms and creamy cheese as rich and divine as something you would expect to dine on in heaven. Hands down, there is no other croqueta that can compete with Segovia’s mushroom croqueta; simply decadent.

Patatas bravas are another staple dish that is customary to order at Segovia. What makes this dish better than any other patatas bravas is its simplicity and its sauces. Though I’ve had mille feuille type patatas bravas in Toronto and whole potato renditions, nothing compares to Segovia’s version.

Tonight’s potatoes, weren’t quite how I remembered them, sliced chips rather than chopped cubes, however these fried potatoes were still a good vessel for the spicy and vibrant red sauce and the luscious, garlicky aioli. I stand by my statement, Segovia’s patatas bravas are still some of the best I’ve had anywhere in North America. 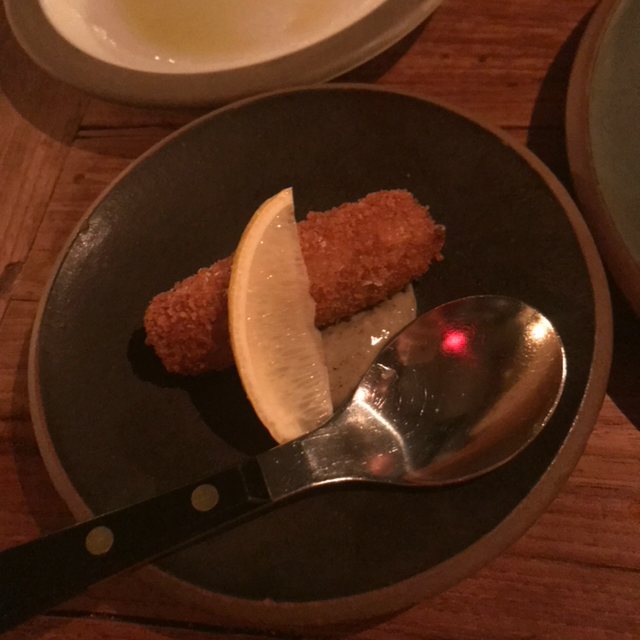 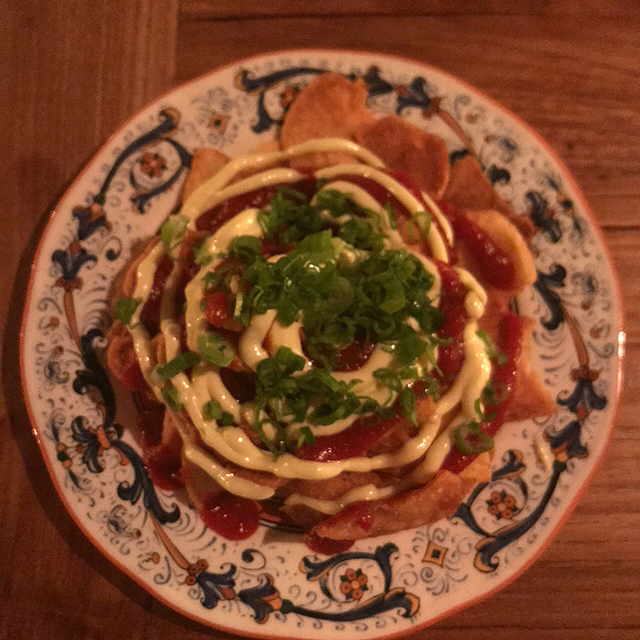 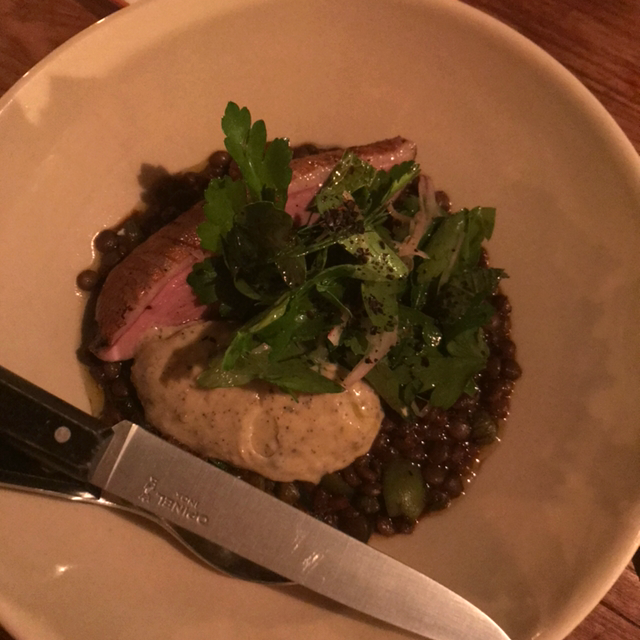 On to the Duck with Lentils and Quince Aioli. Though we wrestled between ordering the lamb or the duck, we opted to try something a little more avant-garde and just the teensiest bit classier.

The fatty skin of the duck breast filet was seared until goldenly caramelized, acting as a barrier to protect the plump, pink meat below, which was tender and not at all gamey. Under the duck was a medley of warm, spiced lentils, which made the duck feel like a folky home cooked dish. A fresh parsley and shaved fennel salad provided much needed acidity to the decadent duck while a gentle smear of quince aioli launched me back into gluttony.

Overall, our meal was lovely as usual. I enjoyed the fall tasting menu with its many unique and global flavour profiles. Though not everything worked for me (ie, the olives), I can confidently say that Segovia has done it again.

Service was great, wine list was thoughtfully curated and menu was intriguing enough that it sort of makes me want to go back later this week to try the other dishes I didn’t sample yet like the Eggplant Frito with Dukkah and Honey or the Scallops, Corn and Sobrasada.

Have you dined at Segovia? What are your thoughts?